There are so many old and different caves in Antalya. Here are the most famous caves of Antalya:

This gorgeous cave of Antalya is located in the Mediterranean Region of Turkey, within the borders of the Alanya district of Antalya province. Damlataş Cave is literally a natural wonder. It is 3 km away from Alanya town center and 40 km away from Alanya Airport on average. Damlataş Cave, Turkey’s first cave opened to tourism. The cave is one of the most important natural caves of Antalya.

The internal temperature of Damlataş Cave is around 22 degrees in summer and winter. It is also known that it is good for asthma disease due to its natural humidity level, pressure ratio, radioactivity, and ions. Since the ratio of oxygen, nitrogen, and carbon dioxide gases in the cave environment are good for respiratory diseases, approximately 4,000 asthma patients visit the cave annually. 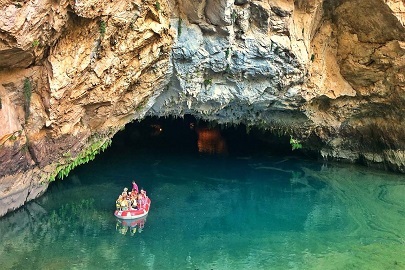 It is located on the western slope of Manavgat Valley, within the Altınbeşik Cave National Park, southeast of Ürünlü Village. The 4,5 km road between the Ürünlü Village and the cave creates a very exciting journey for those who are afraid of heights. The scenery at the end of the road and the natural beauty are enchanting. During this trip, you should definitely see the local “Button Houses” in İbradı District, Ormanda Town, and Ürünlü Village.

Altınbeşik Cave, which has Turkey’s largest and Europe’s 3rd largest underground lake, reaches 2200 meters with its researchable part. The cave begins with a 125 m long lake from its mouth. The depth of the lake reaches up to 15 meters. There is a bridge formed from a natural rock block in the middle of the lake. At the end of this lake, there is nearly vertical travertine covering the entire hall at a height of 44 meters.

Dim Cave, which is 11 km away from the center of Alanya, is easy to reach. From Alanya, Dim Cave can be reached via Kestel Town, Dim Çay valley, and Tosmur Town via asphalt roads. This cave is one of the biggest ones between the caves of Antalya. Dim Cave has a very beautiful view as well as its location. When you arrive at the cave, viewing terraces at various heights and binoculars await you. From here, it is very enjoyable to watch both the valley where the Dim Stream is located and the Alanya Castle from a bird’s eye view.

Dim Cave is 232 m above sea level and is located on the western slope of 1691 m high Cebel Reis Mountain. The small lake with its stalactites and stalagmites offers a wonderful visual feast to the visitors. The part on the right at the entrance is 50 m long, and the part on the left is about 350 m long. There is a constant cool air of 18-19ºC inside the cave. 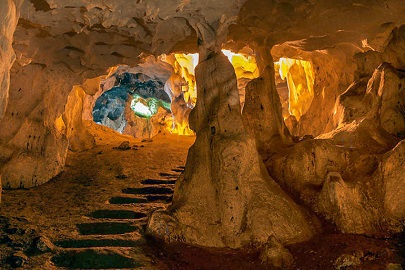 Karain Cave is 46,5 km from Antalya Airport and 27 km from the city center. Archaeological excavations have been carried out in this region since 1946. It has been concluded from the excavations that the region was used as a settlement center 500,000 years ago. It is one of the important and oldest caves of Antalya.

Karain Cave is the largest cave in Turkey known to have been inhabited by humans in history. Karain Cave is also an important paleolithic center for the history of Anatolia and the Near East. There are hunting-themed paintings on the walls of the cave, most of which have survived from the Stone Age, and there are a wide variety of tools, human and animal bones made of stones and bones from those periods in the cave. Bone fragments thought to belong to wild animals such as elephants, panthers, rhinoceros, and lions show that they were hunted by people living in this region at that time.

Zeytintaşı Cave Natural Monument It is located at the Gökçeler locality of Akbaş Village, Serik District, on the 400 m south slope of the Zeytintaşı Hill and is 225 meters above sea level. The upper level is 136 meters, the lower level is 97 meters long, 14 meters deep, and it is a karstic cave consisting of easily meltable rocks that are not resistant to abrasion. It was discovered by chance during the quarrying works in 1977. It has differences from other caves of Antalya.

There are ponds from place to place inside the Zeytintaşı Cave, which is a semi-active fossil cave. The stalactites, stalagmites, and columns in the cave are covered with various dripstones and their formation continues today. The cave has many small halls and chambers formed by dripstone columns. Especially the “pasta (spaghetti) stalactites” in the cave are of unique beauty. It is estimated that the Zeytintaş Cave was formed about one million years.

Since the formation of stalactites, stalagmites, and columns within the Natural Monument of Zeytintaşı Cave is still continuing, it is strictly protected. Unlike other caves in the province, the cave can be visited in groups of up to 10 people and accompanied by a guide. It is forbidden to touch the structures during this trip and it is obligatory to follow the instructions of the guide. It is forbidden to take photos and videos inside the cave, and phones and cameras are not allowed to be brought into the cave.

These are the most famous caves of Antalya. To see the tours of Antalya, click here.