The Fairy Tale of Cappadocia

The Fairy Tale of Cappadocia

The history of human life in the underground cities of Cappadocia dates back to before Christ. Cappadocia is one of the most important places in history. So how they gain their formation and when? What historical events that they witnessed? Let’s learn about the tale of Cappadocia.

The Cappadocia is the place where nature and history are most beautifully integrated in the world. Many geographical events formed the Fairy Chimneys. The region emerged 60 million years ago with the soft layers of lava and ashes. They erupted by Erciyes, Hasandağı, and Göllüdağ; eroded by rain and wind for millions of years. Basically, the lava coming out of the volcanoes forms a 100-150 meter thick layer of tuff (stone made of lava and ash) over plateaus, lakes, and streams.

The plateau intensity is constantly changing with the eruption of lesser smaller volcanoes. With the erosion of this tuff layer, it has become today’s iconic fairy chimneys. The volcanic material is soft and easy to shape when carved. When it comes into contact with air, it starts to harden and become durable. 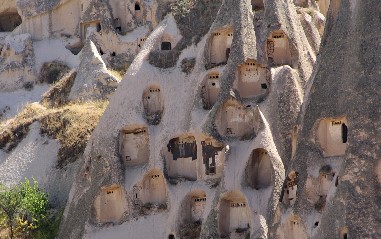 People carved houses and churches into these fairy chimneys; brought the traces of thousands of years old civilizations to the present day. These lands, where the Hittites lived in their time; became one of the most important centers of Christianity in later periods. People used these natural formations as observation and shelter places in ancient times. During the spreading of Christianity, they built churches and built places of worship. And they were used as tombs in the Roman period.

Houses and churches carved into the rocks turned the region into a shelter for Christians escaping from the oppression of the Roman Empire. In the 6th and 7th centuries, underground cities were used as shelters against Arab raids. After these shelters lost their importance, the Christians left these places and settled in the rock cavities in Göreme, Soğanlı, and Ihlara valleys and built hundreds of churches.

During the time of Roman Emperor Augustus; Strabon was one of the authors of the Ancient Period. He states the borders of the Cappadocia Region as a wide region extending to the Taurus Mountains in the south, Aksaray in the west, Malatya in the east, and the Eastern Black Sea coast in the north in his book ‘Geographika’ (Anatolia XII, XIII, XIV).

If you want to be witness to the wonderful tale of Cappadocia and be amazed by fairy chimneys, check our tours.