Top 5 Places to Visit in Kaş

Top 5 Places to Visit in Kaş

In this article, you will find the top 5 places to visit Kaş. Kaş is a cute town and tourist resort located in the west of Antalya province. It is 192 km from Antalya and 106 km from Fethiye. The name of Kaş was Antiphellos in ancient times. Later, the surroundings of Kaş known as Andifli; surrounded by mountains and the deep blue Mediterranean right in front of it. The presence of the island of Meis right across, for this reason; was named Kaş. Kaş is a place worth seeing with its different geography, natural, cultural, and historical environment.

You can reach the historical places, natural beauties, and touristic places in Kaş. Kaş is a starting point for “Blue Voyage”.

It includes all kinds of tourism from nature tourism such as; diving tourism, camping tourism, hotels with unique views. As well as boutique hotels, there are many hotels that appeal to luxury tourism. Going to Kaş and returning without visiting the Kekova and returning without swimming in Kaputaş Beach, one of the most beautiful beaches in the world. We strongly recommend you to visit the world-famous Patara Ancient City, Saklıkent Canyon, and Santa Claus Museum which bear all traces of history. 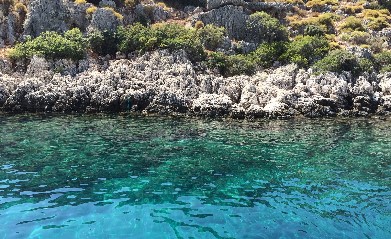 The first place to visit in Kaş is Kekova. Kekova is the cradle of ancient civilizations. This unique region, which brings the sun of Lycia to today, hosts thousands of tourists every year with its rich nature and underwater treasure as well as its cultural heritage. In fact that surrounded by ancient ruins, Kekova is very rich with its sea biodiversity.

In the region, there are tombs with inscriptions written in Lycian script, Lycian-type sarcophagi in the water on the shore that you can go canoe tours, a theater carved into the rock in the medieval castle, rock tombs, water cisterns.

Kaputaş Beach, which is a 1st Degree natural protected area. It is located at the mouth of a canyon that reaches the sea. It’s a beach consisting of white sand and dark blue in the open and turquoise sea on the shore. The beach is descended from the highway with stairs.

When you go swimming to Kaputaş Beach, bring flippers, sunglasses, and snorkels with you. Kaputaş Beach is one of the most known beaches of our country in the world. Kaputaş Beach has entered the list of “Intact Natural Wonders” beaches abroad.

One of the important places to visit in Kaş is Patara Ancient City; located in today’s Ovagelemiş Village at the southwestern end of the Xanthos valley between Fethiye and Kalkan. It is one of the most important and oldest cities in Lycia. In addition to its archaeological and historical values; Patara Ancient City has special importance. It is one of the rare beaches where Mediterranean turtles, Caretta-Caretta, lay their eggs and breed for millions of years.

Saklıkent National Park is located within the borders of the Antalya and Muğla provinces. The Canyon is the best-known place in the park.

The area where you can walk in your daily clothes is not very long. After passing the booths, you cross the road/bridge built on the slopes of the canyon. After that, you come to a striking area with wide trees. Here, the water boiling from the ground, the waterfalls of various sizes pouring from the surrounding slopes, and the sound of the water is very beautiful.

You can sit here in the relaxation area or in the cafeteria. After this section, special shoes and clothes are required. To advance to the inner parts of the canyon, it is necessary to pass through the water. Rubber shoes can be rented in this area. 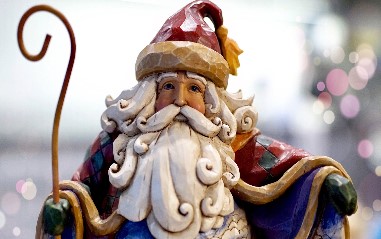 Known as Santa Claus in the world, St. Nicholas was born in Patara, one of the important cities of the Lycian region. He lived in Myra

(Demre). Saint Nicholas was the bishop of Myra. The respected religious personality of Saint Nicholas enabled him to become a saint after his death. After the death of St. Nicholas, who was believed to be the savior of the poor, protector of sailors and students. The people of Myra built a church in his name and put it in the sarcophagus.

These are the top 5 places to visit in Kaş. The beaches and history await you!. Find tours to Antalya.