When you go to Cappadocia, do not think that the only ones that will remain in your mind and fill your memories will be limited to fairy chimneys, underground cities, and valleys! When you see Avanos pottery, you will understand that the people of this region, which seems dignified with the wisdom of the past, are actually artists coming from ancestors, fathers, in short, genes. Even seeing it will not be enough, maybe you will pass the wheel, you will want to try it too.

Flowing from the middle of Avanos, one of the three touristic centers of Cappadocia such as Ürgüp and Göreme, Kızılırmak has left its tuff-red soil as a gift for centuries, while actually being instrumental in the birth of art. The pottery paste obtained with this mixture of red earth and clay was touched by the handiwork of Avanos artists and made it a place that comes to mind when Nevşehir Avanos pots are mentioned.

The history of Avanos, which is located in the north of the city and was known as ‘Venessa’ in ancient times. The history of Nevşehir Avanos Pottery has continued uninterruptedly since the Hittites, who steered all of Cappadocia. In ancient times, Avanos pottery was marketed on horses and donkeys in the surrounding villages and towns, and this method continued during the Ottoman period. This art, which has developed like an ancestral profession by passing from father to son, from tribe to tribe, and adding something to itself in every period, has been the main source of livelihood of Avanos in the past as it is today.

How Are Avanos Pottery Made?

Although Avanos pottery seems easy when it is on the wheel of its master, it is actually not that easy at all. Avanos pottery is also called ‘Avanos art’, probably because its characteristics require both skill and creativity. The production stages of pottery, on the other hand, are not such a short process as to become a fait accompli.

Oily and soft clay soil collected from the skirts of Avanos Mountains and the Kızılırmak beds is first kneaded with water after sifting and turned into dough. For the dough to be ready for use, it needs to be kept for 1 week. Depending on the type of Avanos pots to be made, the properties of the dough also change. The hardness or softness of the soil and the reaction of the silica it contains to the cooking temperature determine the quality of the dough.

Several methods are used during the shaping of the dough. To speed up mass production and production of multi-piece pottery, flat pieces such as plates can be shaped with a machine equivalent to a wheel instead of a wheel. Or the mold method, also called plaster of Paris, is applied, in which the liquid paste is filled into plaster molds and expected to solidify.

But making Avanos pottery, which is recommended by doctors as an occupation that is good for the soul, is most enjoyable when it is on an old-style lathe. The visual feast begins as soon as the potter master sticks the dough he has carefully prepared by hitting it with his feet and sticking it to the wheel he has accelerated. The master puts the dough into a form by first pressing the dough with his hands, then pressing it from the center with his thumbs and emptying it, and in the final stage, he uses a half-moon metal piece and turns it into a pot. You may be surprised that the production of an Avanos pottery made by an artist takes 4-5 minutes by thinning and rising on the lathe, but sometimes the production of a small bowl you have in your hand can take days with painting and processing.

While the dough was shaped on the looms by the foot, electrically rotating wheels are also used today. Pottery workshops in Avanos are called ‘workshop’ or ‘canakhane’ among the people. One of the most important features of the ateliers is that they are spaces with earthen floors and no light. And these places are usually caves carved into the rocks…

Armoring and Finishing of Avanos Pottery

The painting and decoration of the shaped Avanos pottery without drying it is called armoring in Cappadocia. After armoring, the pots are kept for 2 days until they reach the consistency of leather 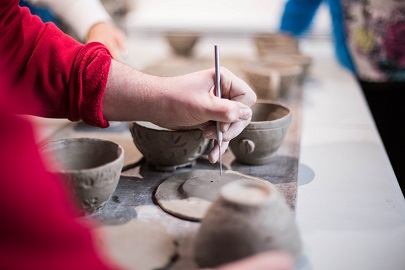 hardness. The polishing of the surface while the dough is not yet fully dried is called ‘polishing’, which is done with a tool (masat) made of sheet metal.

Exposing the pots to the sun for 20 minutes ensures that the moisture is removed. If there is no sun, they are kept in their workshop rooms, also known as “yanalak”, for a day. If it is a product with a handle, the handles are attached and the cooking process begins.

Baking and Glazing of Avanos Pottery

The final stage of Avanos pottery is firing and glazing before it is ready for use. If the dried products are placed in large tubs and designed as household goods, they are baked at 1,000°C, and in harder water-proof containers at temperatures up to 1,400°C for 1-3 days and kept in the oven until it cools down.

Before the glazing process, glassy materials such as powdery glaze, thinned flint, lead oxide, feldspar are mixed with water to prepare the glaze melt. Cooked Avanos pottery is dipped into this melt and fired again, and a glassy appearance is provided on the surface of the pots.