Galata Tower is located in the city of Istanbul in the Beyoglu district. It takes its name from the district of Galata where it is located. It has a touristic value because it is a symbolic structure for the city. You can see whole the city center from the top. Many restaurants, cafes, and shops have been opened in the surrounding area over time. The tower is also on the logo of Beyoğlu Municipality.

The tower was first built by the Byzantine Emperor Justinianos in AD 507-508. It is known that its present shape was given by the Genoese in 1348. It was damaged by an earthquake in the 1500s. After that, it was repaired by Architect Murad bin Hayreddin. When the tower was repaired by Selim III, a bay window was added to the upper floor of the tower. In 1831, the tower suffered another fire. Mahmut II added two more floors above the tower. The top of the tower is covered with the famous cone-shaped roof cover. Galata Tower, one of the most important structures that make up the silhouette of Istanbul, was used as a long-term fire watchtower and was named Galata Fire Tower. 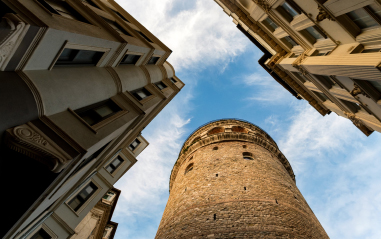 According to a legend; in the seventeenth century, Hezarfen Ahmet Çelebi made a flight from the tower to Üsküdar with wooden wings made by himself. After that, it is known that the interest in the tower gradually increased.

The tower, which was in bad condition in the 1960s; was restored by the Istanbul Municipality and opened to visitors. Considered among the oldest towers in the world and one of the symbols of Istanbul, Galata Tower was included in the UNESCO World Heritage Tentative List in 2013.

Galata Tower was restored by the General Directorate of Foundations in 2020. The reinforced concrete elements and the cafeteria were removed. It reopened its doors to visitors as a museum.

Perhaps the most interesting legend among the Galata Tower legends is the oldest one. According to this legend, the Romans believed that if a man and a woman went to Galata Tower together for the first time, they would definitely get married…

You can learn more stories about the city. Find tours to Istanbul.