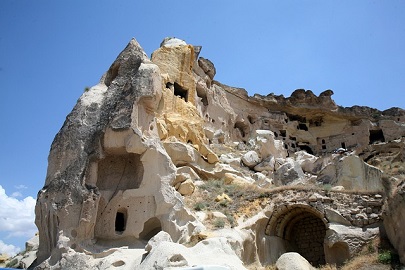 If we consider that there are settlements carved under all the villages and towns in the Cappadocia region, which covers a total area of ​​25,000 km², there are perhaps more underground cities than anticipated. And such an underground network peculiar to the geological structure of the region is not found anywhere else in the world.

The underground cities of Cappadocia were built by carving the rocks down in volcanic tuff land. It is not yet known what tools people used to descend into the depths where such large settlements were created in ancient times when there was no technology.

Why Were Underground Cities of Cappadocia Built?

Since Cappadocia has been subject to frequent attacks and raids in its thousands of years of history, there are rooms and secret passages under almost every house that can be hidden in case of danger. The supply tanks, water wells, chimneys that provide uninterrupted ventilation, toilets, and places of worship, which provide shelter for thousands of people for a long time without ever going out, are also proof of the perfect design of the underground cities of Cappadocia.

The first written source about the Underground Cities of Cappadocia is Ksenephon’s Anabasis (The Return of the Tens of Thousands). The rock reliefs of the Hittite civilization, which was founded 2000 years before the birth of Jesus, and the underground tunnels they built for defense also prove the antiquity of its past. Then the first Christians come and the cities are getting deeper and wider in order to protect themselves from Arab raids and to store food.

Derinkuyu Underground City is one of the deepest, widest, and most surprising underground cities of Cappadocia. Located on the Nevşehir – Niğde road and 30 km from Nevşehir, the 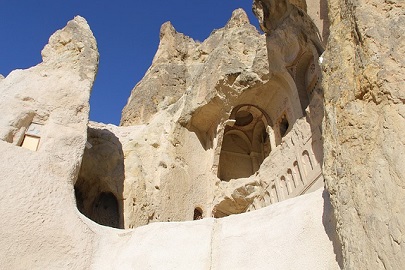 underground city is located in the Derinkuyu district.

Derinkuyu Underground City was discovered in 1963 and part of it was cleared and opened to visitors in 1967. Although 8 floors are open at the moment, descending to 50 meters, if all of them are cleared, the actual depth will reach 85 meters. This underground city of Cappadocia, whose cleaned and accessible area spans a total of 2,5 km, takes its name from the 52 water wells in it. These water wells go down to a depth of 60 – 70 meters, both using the water needs and serving as ventilation shafts. Some of these chimneys have no connection with the earth, in order to prevent the enemy, who could not go down during the sieges in the region, from mixing poison with the water. This is one of the reasons why this underground city of Cappadocia, which has been so sheltered and equipped with a natural ventilation system, has no technological explanation.

It is thought that approximately 50 thousand people can live at the same time in Derinkuyu Underground City, where the first settlement dates back to the Assyrian Colonies and the first Christians hid from persecution and oppression.

This underground city, which is almost half the size of Derinkuyu Underground City, is located in Kaymaklı Town, 20 km from Nevşehir, and has been among the UNESCO World Cultural Heritage Sites since 1984. Its history goes back to where there were Hittites and Arab raids. The 8th century marks the Phrygian period.

Kaymaklı Underground City is one of the biggest underground cities in Cappadocia. Although its actual depth goes down to 8 floors, 4 floors of Kaymaklı Underground City are open to visitors at the moment. The first floor is divided into barns to facilitate the exit of the animals, and passages to the church and other living areas are provided with the corridors opening from the barns. The entrance to the church on the 2nd floor, which was built as 2 apses and a single nave, was controlled with bolt stones. When you enter the church, you will see the baptismal stone placed in front of the apses and sitting platforms carved on the sides, and you will encounter tombs that are thought to belong to church officials. Living areas, living, shelter, wine, and supply rooms are spread over the 3rd and 4th floors. This underground city is thought to be one of the most populated underground settlements, housing 5,000 people at the same time.

Özkonak Underground City, located 14 km from Nevşehir Avanos, was built on the northern slope of İdiş Mountain, where the tuff layer is most intense. While visiting this underground city of Cappadocia, which was opened to visitors in 1972, you will feel as if you are getting out of an apartment. The labyrinth tunnels in all Cappadocia underground cities are the main elements that connect the spaces here, too. The aspect that distinguishes it from Derinkuyu and Kaymaklı underground cities in the small capillary holes of 5-8 cm opened for communication and ventilation. 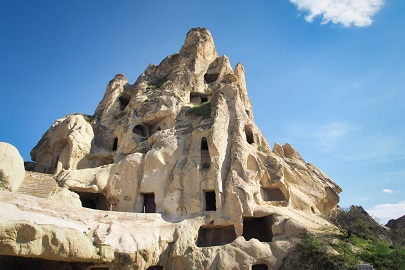 Although discovered in 1975, Tatların Underground City, which was opened to visitors in 1991, is 10 km from Nevşehir’s Acıgöl town. It falls to the north of it and is located on a hill called ‘Kale’ in Tatların Town.

A large number of stores and churches in the Tatların Underground City, whose living spaces are connected by tunnels found in the underground cities of Cappadocia, suggests that this place may be a military garrison or a monastery complex, not a civilian settlement.

Özlüce Underground City, which falls 6 km west of Kaymaklı Town on the Nevşehir – Derinkuyu road, was named after the village it is in. Unlike other Cappadocia underground cities, it has not been opened to visitors yet, as it has a single-story, wider carving and has not been fully cleaned, and also contains the risk of dents. The fact that the tuff layer on which it is carved contains different colors makes Özlüce Underground City different from the others.

The underground city, which is 35 km west of Gülşehir district of Nevşehir, is located very close to Gökçetoprak village. It was first discovered by French researchers in 1989. The difference between Sivasa Gökçetoprak Underground City from other underground cities of Cappadocia is due to its geological structure. There is mudstone at the bottom of the layers it was carved in, large-grained tuff above it, and andesite rocks at the top.